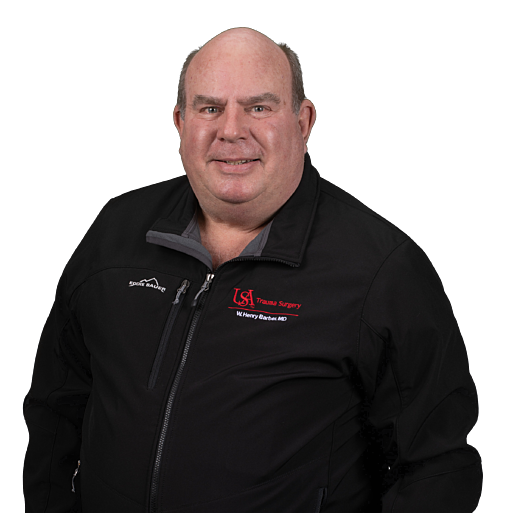 Trauma/Emergency General SurgeonProfessor of SurgerySpecialty: Trauma, Surgery
Refer a Patient
1 (251) 445-8282
Share this provider with a friend or family

Dr. Barber was a categorical resident in General Surgery at University of Alabama in Birmingham from 1979 to 1986 at which time he completed a fellowship in Immunology at Balliol College, University of Oxford, England, and completed his Doctoral Thesis in 1994 and obtained a D.Phil. degree.

He was appointed to the faculty at the University of Alabama at Birmingham Department of Surgery in the Division of Transplantation and was subsequently awarded both R01 and U01 research grants from the NIH, related to his work in transplant tolerance induction. He also received a Sandoz research fellowship.

Dr. Barber moved to Jackson, Mississippi, in 1993 as Director of Renal Transplantation and served as professor of surgery, division director in General Surgery, and director of the Surgical Residency Program until 2010. He then accepted a position in the private practice of General Surgery at Delta Regional Hospital in Greenville, Mississippi, prior to his current appointment at the University of South Alabama. Dr. Barber is author or co-author of numerous scientific publications.